1. The bones of King Richard III have been discovered under a parking lot in England. They’ve been confirmed via DNA comparison to a living descendant of Richard’s sister Anne – how cool is that? Also, the bones reveal that Richard was in fact “hunchbacked” as he had scoliosis.

2. There’s an interesting article about how it’s harder to make good friends once you’re out of college and are in your 30s.

3. To all my Niners friends, Jello has got you covered – they’re giving away free pudding in the city to “mask the taste of defeat.”

Because I’m both a history and Shakespeare geek, I think this is awesome. Archaeologists think it’s possible they might have uncovered the bones of King Richard III.

A dig under a council car park in Leicester has found remains with spinal abnormalities and a “cleaved-in skull” that suggest it could be Richard III.

The University of Leicester will now test the bones for DNA against descendants of Richard’s family.

“Although we are far from certain yet, it is already astonishing.”

After the battle of Bosworth Henry VII didn’t want anyone claiming that they were Richard III and had survived the battle.

Richard’s body was taken to Leicester, slung naked over the back of a horse, and publicly displayed so people could see he was dead.

But there was the problem of how and where to bury him – what seems likely is that they wanted to avoid anything that would generate a posthumous cult.

There was a tradition in medieval England that people who were political victims then became popular saints. They wouldn’t have wanted to bury him in York, where he was very popular.

Greyfriars was convenient and safe. Henry VII put steps in action for a tomb to be built, and the inscription was to be ambivalent, and in some ways rude about Richard III, talking about his nephews and indicating that he wasn’t a very good king. There is evidence that people talked about him being buried there.

A university spokesperson said the evidence included signs of a peri-mortem (near-death) trauma to the skull and a barbed iron arrow head in the area of the spine.

Richard is recorded by some sources as having been pulled from his horse and killed with a blow to the head.

The skeleton also showed severe scoliosis – a curvature of the spine.

I’ll be really curious to see what the DNA reveals.

This story is pretty nifty – while doing some construction work in London, it seems that William Shakespeare’s pre-Globe theatre – The Curtain Theatre – was accidentally excavated. 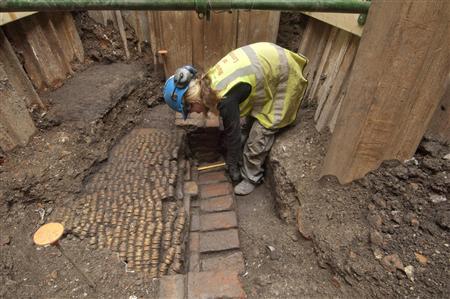 have you ever wondered what would happen if Shakespeare wrote a Tarantino script? Well wonder no more. Some brilliant folks updated Pulp Fiction. And by “updated” I mean, “translated into Shakespearean talk.”

NPR has a great look at a girl’s blog about sayings we use from Shakespeare.

And an interesting piece on the Guardian – does it matter who wrote the plays of Shakespeare?

And, because I’m watching Trek right now, and this video is totally awesome:

Interesting article – a man wants to exhume William Shakespeare to drug test him. He also wants to ascertain cause of death and establish authenticity.

Will the Stoner? I’d buy it. I’ve read Pericles. 😉

An interesting look at 6 dictators and their secret hobbies.

Scientists are now trying to recreate Shakespeare’s 3-D face from… a death mask! For TV!

A line by line breakdown of American Pie, which I still know all the words to, drunk or sober. Go Illini!

Proving that real life is weirder than fiction… Time Magazine has a blurb about uhm, the missing penis of King Tut. For real.

I’d read about this years ago and now it’s coming to my part of the woods. I think I want to go to this: MacHomer.

I’m not just a girl who loves zombies, octopi, and geeky things. I’m real classy too. Here’s a list of some cultured things that have got me geared up lately.

Ricky Martin is going to Broadway – in a revival of Evita! Couldn’t be worse that Antonio Banderas, am I right?

An early review of Julie Taymor’s film version of The Tempest, starring the DELICIOUS Helen Mirren is pretty darn good. Can’t wait to see this in December!

I really really really want to see Rosenkrantz and Guildenstern are Undead. Three trailers here. 1. Vampires doing Hamlet 2. RALPH MACCHIO 3. Need I say more? It seems to be limited screenings so I might have to wait for a DVD but we’ll see.

Some more news on Roland “Blow The World Up” Emmerich’s Shakespeare film. It sounds… interesting?

"The 'Net is a waste of time, and that's exactly what's right about it." – William Gibson